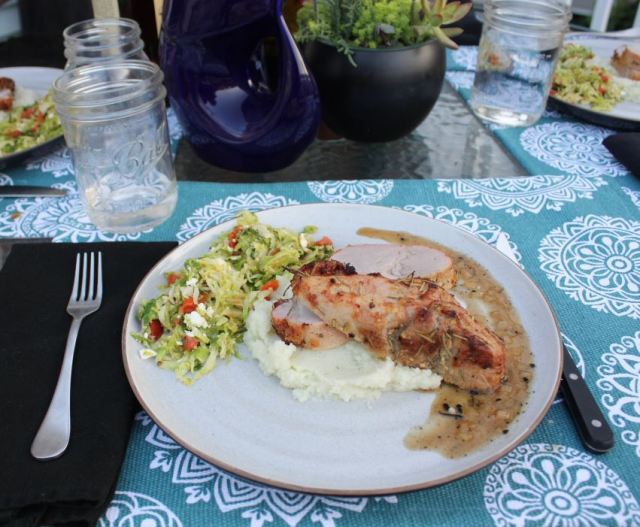 This weekend was the Jimmy Fund Walk, in which participants walk any distance along the Boston marathon route, from a 5k to a full marathon, in support of Dana Farber Cancer Institute.  This was the second year that my father and aunt walked in honor of my mother and in support of the hospital that provided her unmatched treatment for several years. They came home surprisingly untired despite the fact that they had walked a half marathon and a 10k, but the energy from the event seemed to invigorate each of them as they already began to build their team for next years walk.

We decided to have them over (or shall I say upstairs seeing as we share a two-family house now) and made this simple but flavorful Sunday meal of roasted pork, garlicky cauliflower puree, and shaved warm brussels sprout salad with tomatoes and feta.

The original recipe that I found noted to cook the pork to 155 degrees, but both my father and aunt suggested we remove it from the oven at 140.  This tip was SPOT ON as the pork was juicier than any we have made ourselves at home.  Cauliflower puree paired well with the meat and I’m glad that I added a few roasted garlic cloves to the puree.

We then walked to the local ice cream store for a late night treat – the perfect way to round out the weekend.

Thoughts for Next Time: